Day to Night Barbie came in the box looking dressed for work in a pink suede-like suit—but the skirt reversed to a ruffly brighter pink side, and a scarf (not shown) covered up a dazzling top underneath. This Barbie was all ready for a night out right after leaving her office building. 🙂

The original scarf and dazzling pink top are not shown here; a similarly pink top is shown instead underneath her blazer. The pumps she originally wore were quite clever, as well: They were white but tipped with a pink toe.

Day to Night Barbie actually came with some accessories, as well: a white hat brimmed with a pink strip with white polka dots, plus a briefcase. 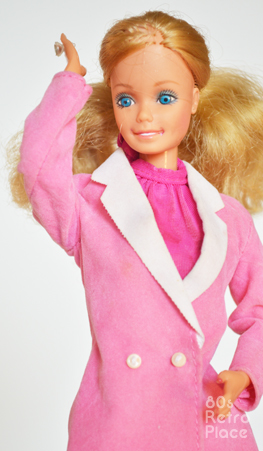 These 80s Barbies, shown in their original outfits, were made to resemble what they looked like in the box as much as possible. However, shoes that have been lost may have been substituted.